Getting to Know Michael Vandormael 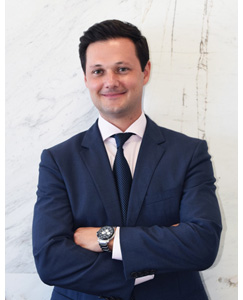 Michael joined Barbosa Legal at the beginning of 2016 and we have enjoyed the experience, diligence, and professionalism he brings to the firm.  We sat down with Michael to get to know him better. This is what we learned.

Michael was born in Liege, Belgium, and raised in Toulouse, France where he spent most of his youth. Inclined towards the medical profession like his father, Michael obtained a baccalaureate degree of science with a focus in biology.

While living in France, Michael sparked a passion for golf when he attended a summer camp at the Ilbarritz golf academy in Biarritz, France. Michael thereafter took on the sport and actively competed in various amateur tournaments in the south of France. After completing his high school studies, Michael moved to Florida to pursue a career in golf. He attended the IMG Leadbetter Golf Academy in Bradenton, Florida, before enrolling at the nearby Eckerd College in Saint Petersburg, Florida. Michael was offered a scholarship to study business management and play for the Eckerd College intervarsity golf team.

After college, Michael accepted a position working for a medical device company, Conmed Linvatec, in Largo Florida. He recalls a specific incident that guided him towards the legal profession: “An order of medical devices coming from Brazil was destined to ship to the United States, but was erroneously sent to Japan, resulting in severe duties and taxes levied on the shipment.” Michael became fascinated with the impact of global tax and trade laws affecting global business transactions.

Michael decided to complete his legal studies and attended the Shepard Broad Law Center at Nova Southeastern University in Ft. Lauderdale, Florida. While in law school, Michael was chosen for an internship at one of the leading international Belgian law firms, Liedekerke Wolters Waelbroeck Kirkpatrick, in Brussels, Belgium.

During this internship, Michael received hands on experience with cross-border tax and business transactions, which reaffirmed his desire to become an international tax attorney. After graduating from law school, Michael obtained an LL.M. in Taxation at the University of Miami School of Law.

Shortly after completing his LL.M. in Taxation, Michael began his own legal practice advising U.S. and non-U.S. high net worth individuals and their families on various domestic and international tax matters. Thereafter, Michael accepted a tax associate position for a boutique international tax firm in Miami, Florida, where he gained valuable experience in international taxation, estate and trust planning, business, and tax controversy matters.

Michael believes Julio and him share similar visions of the ideal international tax practice: “Providing concierge and personalized legal solutions, that best serves the needs of our international clients. . . . I’ve really enjoyed working at Barbosa Legal, its tax team is a fusion of young energetic and experienced tax attorneys with multi-cultural experiences and multi-lingual capabilities.”

We are happy to welcome Michael to the Barbosa Legal family and look forward to watching him grow and excel!